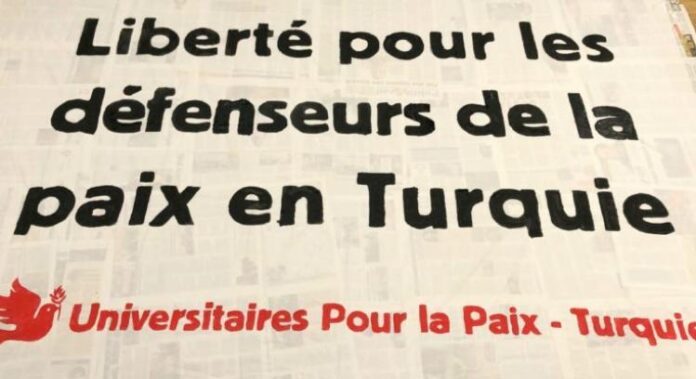 On September 25, 2020, the Ankara Chief Public Prosecutor’s Office issued arrest warrants against 82 members of the Peoples’ Democratic Party (HDP), the second biggest opposition party in Turkish Parliament, including 24 former Central Executive Committee members. They were taken into custody and were restricted from meeting their attorneys for 24 hours.

On October 1, 2020, the court ordered the pre-trial detention for seventeen of them, including the co-mayor of Kars, Ayhan Bilgen, the former MPs Ayla Akat Aka, Emine Ayna, Nazmi Gür, Professor Dr. Emine Beyza Üstün, HDP’s former Central Executive Board members and researchers Cihan Erdal and Can Memiş.

We demand that all who have been arrested in operations against HDP, including our peace signatory comrade, peace academic Prof. Dr. Emine Beyza Üstün, and our colleagues Cihan Erdal and Can Memiş be released immediately.

Professor Emine Beyza Üstün is an academician, and well known ecologist and activist. She served as HDP deputy in parliament in 2015. Professor Üstün has a BA degree from the Faculty of Civil Engineering (Anadolu University, Eskişehir) and MS (Bosphorus University, Istanbul) and Ph.D. (Yıldız Teknik University; Istanbul) degrees from Environmental Engineering.

Cihan Erdal is a PhD candidate, at the Department of Sociology and Anthropology of Carleton University, Canada. He was an active member of the HDP in 2014 as a youth representative. He moved to Canada for his doctoral studies in 2017. He was in Turkey to visit his family and conduct interviews for his doctoral fieldwork. Cihan’s research is on youth-led social movements in Europe, including in Turkey, focused on the stories of young activists about their involvement in social movements.

Can Memiş is a young law student. He also holds a BA degree in Sociology from Mimar Sinan Fine Arts University and is enrolled in the master’s program “Philosophy and Social Thought” at Istanbul Bilgi University. He was held in pretrial detention for a meeting that he did not attend in 2014, while he was the representative of the Youth Council as a member of Peoples’ Democratic Party (HDP) Central Executive Board. Can is an activist who is committed to peace, democracy, non-violence and ecological life for many years.

With solidarity,
Academics for Peace